Exciting new venue for soccer and execution of women 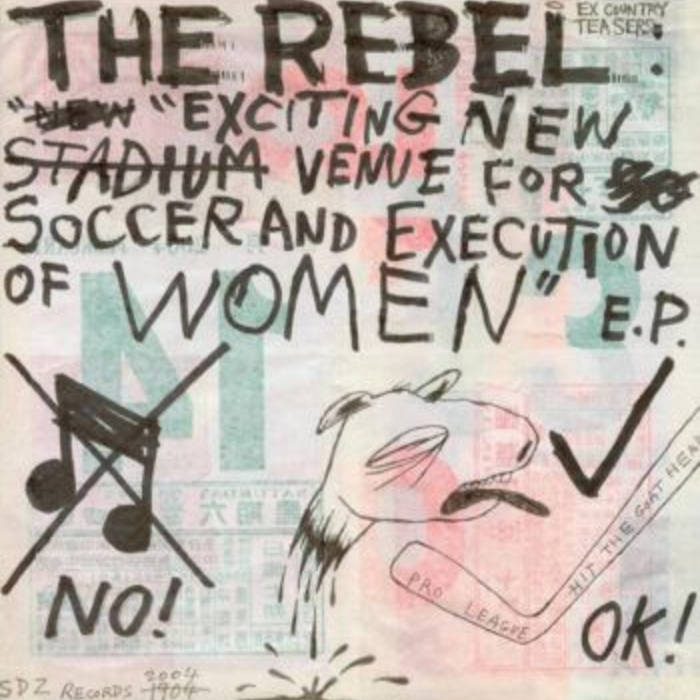 "Ben R Wallers is THE REBEL. He has founded the COUNTRY TEASERS more than ten years ago in Edinburgh, Scotland. The band has released five LPs and as many singles on labels like Crypt, Fat Possum, Guided Missile and In The Red. Far from garage punk standards, the COUNTRY TEASERS have developped over the years a sound of their own. Their sloppy garage rock includes some great country & western influences as well as the irreverence of the early Fall records or the minimalism of early new wave. These intrepid lads not only produced some essential deviant and distorted music but also left more than an audience clueless or angry regarding the sheer irony of their lyrics.

Wallers can use the irony, satire and black humor like no others. His
solo project under THE REBEL monitor is a perfect example of that.
Instead of using irony as an excuse to be naughty, he uses it to
address some important issues like sexism and racism. Much like
William S. Burroughs adopted the phraseology of those he's satirizing.
This will probably leave some listeners full of questions. Originally
available only through home-made tapes with very long titles, these
free songs, somewhere between twisted country ramblings and lo-fi
electro pop, clearly confirm the unique talent of THE REBEL,
alongside Mark E Smith, Calvin Johnson or Wesley Willis. THE REBEL doesn't sing about beautiful things. He'd rather sing with a dragging and monotone tone on eerie melodies the growing fascination of our western civilizations for evil and horror. Which brings him on dangerous but fascinating territories where he questions our rights and liberties. THE REBEL is an artist. With a big fuckin' A.

EP is sold out

Info on The Rebel: en.wikipedia.org/wiki/Ben_Wallers

Bandcamp Daily  your guide to the world of Bandcamp

outré black metal, with a Victory Over the Sun interview and music from Liturgy and Jute Gyte.